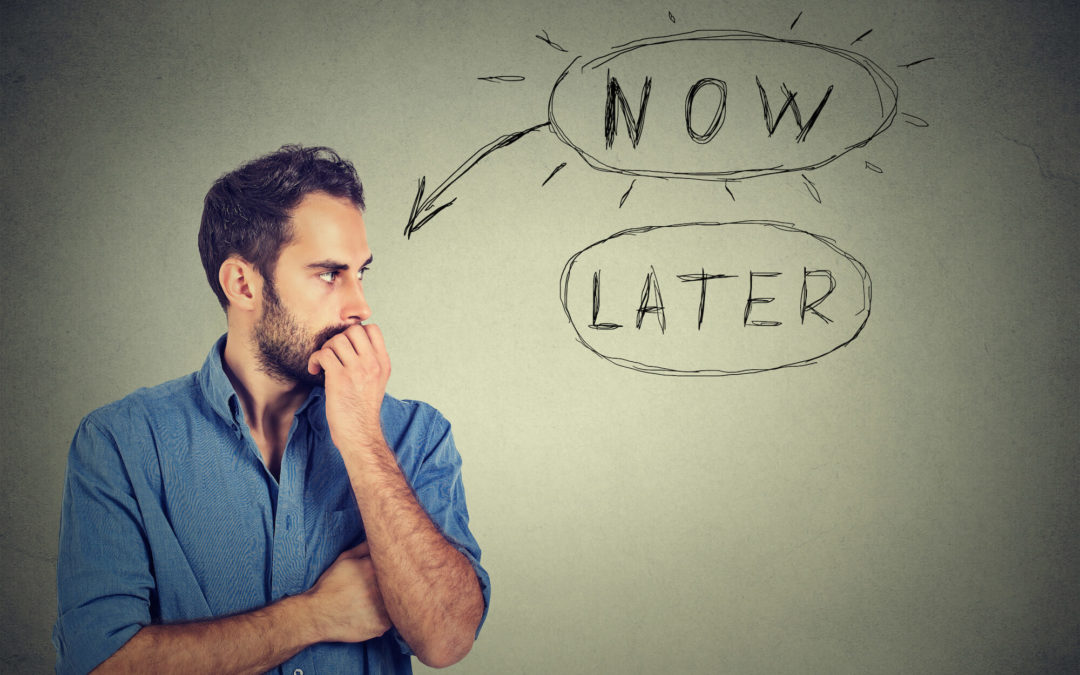 When I started this blog post, I did what I normally do: I opened a new doc, wiggled my fingers, and rested them on the keys of my laptop. “Procrastination,” I wrote.

No flashes of inspiration were coming to me, so I did what I also (sometimes) normally do: I looked at my pinned tabs in Chrome, I checked my emails, I looked around. A bird flew from chair to chair, a strange sight in a shopping mall.

“How did he get in here? More importantly, who helps him get out?” I pondered.

Naturally, I picked up my phone and Googled, “Who gets birds out of malls?” A blog post from The National Audubon Society appeared first, providing step-by-step instructions for capturing a rogue mall bird so you can safely free him.

“Well, I can’t very well ask for a shoebox and a towel and spend my afternoon attempting to capture this bird, can I?” I reminded myself. I checked the search results again.

Ah, finally, an answer that made me feel better and like the burden was not on my shoulders… Some stranger on Quora who may or may not be an authority on the topic wrote that typically the mall workers wait for the bird to enter a store with lower ceilings, and then carefully capture and remove the bird from the mall.

“Thank God, this bird will be freed by the nice mall workers and I can sleep tonight.”

I returned my eyes once again to my computer screen and the document with one lonely little word on it. The word “Procrastination.” I’d just procrastinated writing a blog post on procrastination.

To quote Airplane II, “Irony can be pretty ironic sometimes.”

Why Do We All Procrastinate?

I’m sure if you’re a human reading this and not a Google bot, you’ve experienced a similar situation. Maybe you didn’t have a bird to make procrastinating the easy and obvious choice, but you of course found plenty of distractions to keep you from doing the thing you knew you needed to do.

Why do we all procrastinate?

Well, all the brainy neuroscientists, psychiatrists, and researchers are finally telling us what we want to hear: it’s not our fault. Well, not really. At least not in the way you’re probably thinking…

You’re probably used to thoughts like “I’m lazy,” or “Why can’t I just be disciplined enough to do this?” You know, all those thoughts that crop up and tell us we’re not normal — that there’s something wrong with us.

But here’s the good news. According to Dr. Tim Pychyl, a professor of psychology and a member of the Procrastination Research Group at Carleton University in Ottawa:

“Procrastination is an emotion regulation problem, not a time management problem.”

He explains that we’re hardwired to prioritize “short-term mood repair” over  the “longer-term pursuit of intended actions.” In other words, those productivity and time management books that promise they’ll teach you how to do 40 hours worth of work in 8? You can finally remove them from your Amazon cart.

Dr. Fuschia Siroir, a professor of psychology at the University of Sheffield, says,

“People engage in this irrational cycle of chronic procrastination because of an inability to manage negative moods around a task.” She also says, “The thoughts we have about procrastination typically exacerbate our distress and stress, which contribute to further procrastination.”

Wait, so all that self-blame and feeling bad about yourself because you’re procrastinating just makes you procrastinate more? Life is full of “fun” little cycles like that, isn’t it?

The good news is now you know, and knowing is half the battle.

So, the next time you catch yourself procrastinating, don’t be too hard on yourself. Acknowledge that there’s nothing “wrong” with you, and that all you’re really doing is what you’re programmed to do: deflect threats/discomfort/pain for temporary relief. It’s evolution, baby.

And hey, the problems caused by your procrastination aren’t your problems anyway — they’re the problems of future you. Do you really care more about future you than you do present you?

Of course not, because future you isn’t as solid a concept as present you. Sure, if you do what you need to do it might feel good for future you, but present you is more interested in feeling good right now.

How Can We Stop Procrastinating?

So, we know that you’re normal. Phew. But does this mean there’s nothing you can do? Is procrastination an inevitable part of your future?

Thankfully those smart neuroscientists, psychiatrists, and researchers didn’t stop with “You’re normal.” They also offered some advice for how to hack our brains and get things done.

What’s the secret? 1. Give yourself a greater reward than the reward procrastination provides. 2. Make it harder to procrastinate and easier to get things done. 3. Think only about the next step.

#1 Give yourself a greater reward.

How does it work?

Well, procrastinating feels kinda good because it keeps us from doing the thing we don’t want to do, whatever that may be. Avoidance feels all warm and fuzzy. So, we have to find something that feels even warmer and fuzzier.

What you might not expect though, is that that warmer and fuzzier feeling comes from self-forgiveness. We have to respond to our tendency to want to procrastinate, not with self-blame, but with self-acceptance. We have to show ourselves some compassion and not take this one habit and let it define us.

When we make it personal and infer that because we’re procrastinating we’re lazy, undisciplined, bad stewards of our time, etc., we actually create even more pain around what we need to do, and deepen our drive for avoidance.

So step one is letting go of that self-blame and giving yourself a pass. That’s the reward: self-compassion and forgiveness. And it’s a much bigger reward than the reward of avoidance.

#2 Make it harder to procrastinate and easier to get things done.

What are your go-to procrastination activities? Do you head over to Facebook? Delete emails? Google existential questions? Organize your desk drawers? Whatever you do, make it harder for yourself.

Delete the Facebook app from your phone or logout of Facebook on your computer so it takes more effort and time to log in. Or, keep your phone in a locked drawer while you’re working on the task at hand, so you can’t just reach over and pick it up every time a notification dings.

Most writers are pretty familiar with procrastination, and the successful ones have methods for making it harder to procrastinate and easier to get work done. Some use writing programs that remove every possible distraction and leave only the document up in front of them. Others turn off their wi-fi, and still others forego the computer altogether and use typewriters. All of these methods are perfect examples of the procrastination brain hack we’re talking about here.

Another common example is the gym clothes/pjs hack. The idea is if you want to work out in the mornings but are having a hard time making a habit of it, sleep in your gym clothes so all you have to do is get up and go. No excuses.

Want to meditate daily? Enable reminders from your meditation app for first thing in the morning. The moment my alarm goes off, my meditation app says, “Swipe right for your morning meditation.” So of course I meditate more frequently since enabling that reminder. Why wouldn’t I? All I have to do is swipe.

#3 Think only about the next step.

Hey, let’s face it. Part of procrastination is intimidation. We see something we don’t really want to do and it’s big, it’s daunting, it’s threatening. So we don’t do it.

Lots of productivity gurus tell us that the answer lies in breaking big tasks up into smaller, more doable chunks. Sure, breaking a big task up into smaller tasks might help, but when it comes to procrastination, all it’s really doing is giving you 20 little things to do instead of one big thing. Lengthening the to-do list isn’t really the solution.

Instead, eliminate the anxiety around the task by thinking only about the next step — not all the steps hereafter.

What needs to be done to start the task? Now that I’ve started, what’s my next step?

But the way you think about that next step is important, too.

Instead of thinking, “I have to do this next,” think, “What’s the next thing I would do, even though I’m not going to do it?” suggests Dr. Pychyl.

That curious and non-committal approach will take some of the “should” and “have to” emotion that causes resistance out of the task, allowing you to just get started.

And the good news is that once you’ve started, it’ll be easier to keep the momentum going because of the sunk-cost bias. This is the neural bias that makes us stick with things we’ve already “sunk” time and energy into.

(That’s why it took you so long to finally give up and put away that 1000 piece Darth Vader puzzle you started.)

What Things Should You Be Doing?

In business, there are a lot of things you need to do to be successful that you might not really want to do. Like follow-up. A lot of business owners dread the follow up process for many reasons, and they come up with all kinds of excuses for why they don’t or won’t do it. But those excuses are really just forms of procrastination.

The solution: hack the heck out of your brain by making it more convenient to do what you need to do. Set up systems that automate processes you don’t get excited about and watch as the rewards roll in. Once it’s easier and more rewarding to get those things done than it is to avoid them, you’ll find yourself procrastinating less and less. And that’s something present you and future you can be happy about!